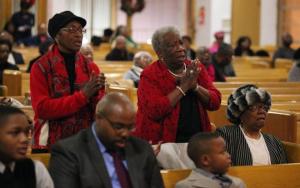 By rough estimates, eight black churches have been set ablaze since the horrific #CharlestonMassacre two weeks ago. As an African American whose spiritual roots are connected to these institutions, I cannot explain the absolute horror that I feel inside. You see, I first caught the Holy Ghost in my grandfather’s church, a Baptist church in Milwaukee, when I was maybe 9 or 10. Before he was placed in a nursing home in my early teens, he took me and my sister to church most Sundays. It was there where I discovered that I could sing, got baptized, and started to develop my love for God.

It was in my grandmother’s church where I first got saved, over 20 years ago now. And at my mother’s church, where I was discipled. Although both of these churches were a part of the Assembly of God, a historically white denomination, it is because of a black man – William Seymour, that the Assemblies of God exists. Seymour, who became born again at the Simpson Chapel Methodist Episcopal Church and was later greatly influenced by the Holiness movement, was the leading figure in the Azuza Street Revival from 1906 – 1909. Walking in the Holy Ghost, God used him to bring whites and blacks to worship under one roof until racism tore the movement a part. At this point, whites separated themselves and created the Assemblies of God; many black congregants joined the Church of God in Christ, the first sanctioned Pentecostal assembly in the United States.

My Assembly of God experience over the last two decades has been greatly influenced by the black church. I have sat under the leadership and discipleship of two godly black pastors, in both Milwaukee and Minneapolis; without their influence and presence in my life, I would not be where I am today. Seeing them lead in the pulpit week in and week out was affirming in a society that consistently demonized blackness. So you see, I am tied to the black church. I owe my salvation to the black church. For me, the black church represents a place of refuge in a nation that insists on terrorizing us.

Yet, black churches are burning again in America.

Unfortunately, however, there are people in our nation who do not look at the black church through the same pair of eyes that I do. The very things that mean safety for me, are the things that cause others to tremble because of the black church’s enduring stance against white supremacy. Indeed, the black church was founded in response to blacks being forbidden to participate in the life and worship of the white church. Our coming together was not only characterized by worship, but a deep commitment to overturn slavery and racism in this society.

But catch this. The same whites who attack our churches and mock our God, also claim to worship this same God. Remember that the black church was born as a result of not being able to participate in the white church, and so, historically many of the whites who have committed these atrocious acts are also following Jesus! They are reading the same Bible that blacks are reading. They are eating from the same communion table that blacks are eating from and bowing their heads in prayer to the same God we pray to. Then they hold up God’s Word as a justification for assaulting black life.

Thusly, the same cross that white supremacy hides behind to sanction violence against black people is the same cross it attacks to further this violence. Such proves that it has never been about Jesus, but evoking a gross caricature of our Savior as a means of social order and control. For the sake of white supremacy, Christ Himself is re-victimized and crucified all over again!

We may not necessarily know #WhoIsBurningBlackChurches in this hour. But we do know what allows such things to be: white supremacy clothed in a distorted form of Christianity. It is this form of Christianity that our nation claims is its foundation and that certainly may be. But so that we are clear: this American Christianity no more resembles Christ than does a cat resembles a car – the two are simply not the same thing! It’s time that we stop allowing our Savior to become the sacrificial lamb in order to bolster whiteness.