This morning I listed to mid-morning with Kerri Miller on Minnesota Public Radio. With her this morning was Eugene Robinson, author of Disintegration: The Splintering of Black America. In his interview with Ms. Miller he talked about several things that really stood out in my mind. For Mr Robinson, the terms that we have used to define Black America have changed and we can no longer describe Black Americans as a monolithic group. Instead, Black Americans consist of four groups, two of which are the emergent group and the abandoned group. The emergent group is made up of Black Americans who have escaped the cycle of poverty and disparity, and besides the traditional Black American also included immigrant Africans and mixed race Americans, in that both seem to be highly educated. The abandoned group, however, is made up of those who are still entrenched in poverty, perhaps they live in the ‘hood,’ and do not have the opportunities afforded to them that those in the emergent groups have. (I really don’t like the term ‘abandoned group’ but for the sake of this article I will go with it).< 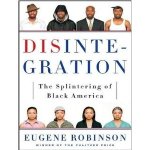 In this same interview, Mr. Robinson also said that the future of race in America is beige. For him, the barriers that were once existent, prohibiting progress in the black community are no longer there. He envisioned a future where race in America would no longer exist and everyone would be on an even playing field. With this I would have to disagree because I believe that many of those barriers are still there. I was in a meeting yesterday that mentioned that African Americans are the second demographic of hungriest people in the United States. Hunger itself is a barrier. When children do not have something to eat and go to bed starving, it affects everything that they do including education. A hungry child cannot concentrate in school, and surely will not listen to his or her teacher, making education another barrier. Education is a whole other ball game in that the education that is available to most black Americans is sub par at best if not completely failing. Without proper education, how can you expect these children to ever escape the impending cycle that they find themselves in. For those who do receive excellent education and go on to institutes of higher learner and graduate, finding a job becomes another barrier. Such is especially the case when you have a black sounding name, like Ebony for instance. You won’t even be granted an interview. Even if you have a more neutral name, like Sarah, after the interview you probably won’t be called back for a second unless the organization is trying to meet their ‘black people’ quota. This makes job disparity another barrier – the high unemployment rate in the African American community is the burden of proof. Until these barriers are addressed we are no where close to saying that Mr. Robinson’s beige future is any close to being realized.

However, I must also address the fact that there lies another barrier but it lies amongst the African American community itself. In my opinion, and I admit that I could be completely wrong on this, we seem to have an identity problem. I do not know if it is because we do not know our ancestry and where we hail from, but it seems that we have attached to ourselves this very bleak identity. Yes, poverty does exist within our community, but it does not define our community. Fatherless-ness, crime, and drug addiction exists within our community but it does not make it. The lack of education, quality jobs, and socioeconomic opportunities abound but this does not consist of who we are. Yet I feel like we attach ourselves to these things so that if those amongst our community do not live up to this criteria, they are “sell-outs,” “whites” or other things to place a dividing wall between those in the emergent groups and those in the abandoned groups (like I said before, I really don’t like that word). I believe that this is something that needs to be addressed within our community itself otherwise the other barriers such as poverty, inequality, and the like will continue to exist. We cannot control what others do to us nor can we control the systems that are set in place to keep us from excelling, but we can control how we view ourselves and how we treat one another. As we do such, that gap that Mr. Robinson spoke about will close.