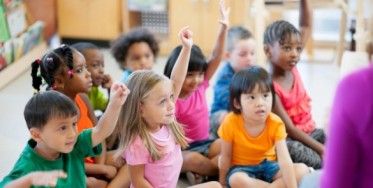 My daughter started kindergarten last week. And it was bittersweet. On the one hand, I was excited to see her transition out of daycare into the formal system of education – a transition that clearly indicated that my precious five year old, the one who I carried for 9 months, nursed for 2 years, and with whom I have spent untold hours reading to, potty training, and you know, general caring for, was growing up. On the other hand, I was a nervous wreck because for the first time in her life she would be under the instruction of a white teacher within a white institution, and I would not be able to be present to protect, love, and guide her through it.

I have heard the stories from parents and educators alike who have witnessed first hand the intrinsic racial bias that is displayed towards students of color. While this bias may not be overt, meaning that it is often not intentional or done from a place of malice, it operates in such a way that targets students of color, limiting their ability to be well and flourish in the same ways that their white classmates do. It does this by drawing on stereotypes about people of color to form conclusions about behavior, culture, and values – conclusions that are inaccurate because the premise from which they were formed assumes that children of color are either always in the wrong or in the perpetual need of white saviors. These negative assumptions are more than simply wrong but absolutely destructive to students whose young minds who are so malleable.

As I mentioned, one of the things that shows that racial bias is evident in the system of education is the high rate of suspensions among black and brown students. In Minneapolis alone, where my daughter is enrolled in school, 400 students from kindergarten and first grade were suspended in the last school year up from 246 in the previous year. And the racial disparity in these suspension is significant. Data from the Minnesota Minority Education Partnership reports that “in 2012, the suspension rates for white males, who make up about 18% of the enrolled student population was at 3.4%. But for African American males who make up about 19% of the enrolled student population, similar to their white male counterparts, the suspension rate was 18.7%.” The disparity between white and black students suggests that there is significant bias when interpreting the behaviors of our youngest scholars. Things that are seen as misdirected but innocent behavior in white students are seen as disruptive and maladaptive behaviors in students of color.

But inappropriate disciplinary action is just one evidence of racial bias in the education system. Racial bias also exists in the macro and micro slights that occur on a daily basis, gradually chipping away at the esteem and confidence of students of color. It’s in whom students are perceived to be before they even walk through the door. Depending on racial or cultural background, some students are treated as if they have a handicap or are in need of some tailored approach to learning simply because they do not possess a ‘traditional’ American name. My daughter and I experienced this last year when we went in to assess her kindergarten readiness. For some reason, the student placement center thought that she was Somali (even though I told them she wasn’t) and issued her an assessment test geared for Somali students. Even after I fought hard for them to change it, they were slow in doing so.

It’s also in the curriculum that is taught and the books that are read and offered to the students. For the most part, black and brown faces are missing from these stories but when they are there, they mostly defer to some racial and/or cultural stereotype about who we are. Such is the case with the books being offered by Reading Horizons, a Utah-based company that specializes in literacy training which Minneapolis Public Schools has a contract with. The books project highly offensive narratives about people of color, immigrants, and women as well (thank you teachers for standing up to that nonsense)!

Lest some misguided reader suggest that the problem lies in Minneapolis’ Public Schools or in public schools in general, let me assert that racial bias in education is vast and widespread. It Racial bias in education rears its ugly head in private, charter, faith-based, and alternative schools across our nation. And yet, America’s system of education is just one tool in the hands of a white supremacist society, perpetually committed to minimizing, silencing and destroying the lives of people of color for profit in order to benefit wealthy white men.

Now, I guess, one can probably understand and perhaps sympathize with my fear in sending my daughter off to school. Over the years, her father and I have gone through great lengths to ensure that she has a healthy understanding of herself: we’ve affirmed that she is beautiful, valuable, intelligent, curious, funny, and so much more. We’ve taught her the beauty that is inherent in her skin color and the curl pattern of her hair which is prone to much shrinkage. We’ve told her that she can achieve anything that she puts her mind to and that she should never say ‘I can’t do it’ but rather ask for help. She is learning that she has a rich cultural history spanning two nations – America and Nigeria and she is thoroughly interested in learning Yoruba, her father’s language. And we’ve told her times without number how much God loves her and how much God delights in her and how much she is fearfully, wonderfully, and beautifully made. This she knows. But I know that she has just entered a system bent on telling her the exact opposite of all that I’ve worked to instill in her.

Perhaps I should take an act of faith. Maybe I should be more trusting and less skeptical. Probably. There are individual schools and teachers who are doing an amazing job and who are intentional about providing the best level of education to all of their students regardless of race, culture, or socioeconomic background. I believe my daughter’s school is one of those schools which is one of the reasons I was intentional in my selection process. These are rare, shining examples which deserve to be praised, uplifted, and modeled. Even so, the system, in spite of the great schools, the outstanding curriculum, and the award-deserving teachers, is flawed, and mostly so for students who look more so like my daughter. The individual stories of success get lost and are even severely impacted by a system bent on destructive – which is highly financed and politicized, further impeding the damage, another story for another day.

So I don’t trust it. I can’t trust it. Having faith in the school system to do right by my daughter and all of those who look like her is like having faith in white supremacy to do the right thing. It just may not happen (soon). The burden of proof is in all of the students of color who walk through the doors of education and leave broken and wounded. So I am not hinging all of my faith here. That would be lunacy. Instead, I stay informed. I stay vigilant. I re-educate and supplement whatever the teacher is teaching with material of my own, books of my own, knowledge of my own. And I resist, I resist the notion that our kids can’t learn, that they are not up to par, that there is something inherently wrong with them because I know that is not true. And everyday, I make sure my daughter knows the same.

And if all else fails, there is always homeschooling!

2 thoughts on “On Kindergarten and Little Black Girls”