We are now in the final week of Black History Month.* During this month long observance, Americans call to their consciousness the many contributions of black Americans in our society. Or at least that is what we are supposed to do. We are supposed to remember people like Frederick Douglass, Ida B Wells, W.E.B Du Bois, Martin Luther King, Fannie Lou Hamer, Stokely Carmichael, Shirley Chisholm, Nina Simone, and Maya Angelou. We are supposed to remember heroes and heroines like these, who changed the course of American history by refusing to allow the dictates of a racist society to keep them in their place. We remember these as inspiration for moving forward in our present day, drawing on their example in today’s Black Lives Matter movement.

The reality is that for many Americans, Black History Month is a sore spot. Many Americans, mostly white, cannot wrap their minds around the need to dedicate a whole month to appreciating black Americans because of their inability to affirm and recognize our humanity. This is because they have so distanced their identity away from blackness through suppression and exploitation, to the extent that any affirmation of such feels like an unforgivable insult to who they are.

This is so much so that in the face of our nation’s changing demographics, white people seem to be experiencing a certain existential crisis. By 2050, people of color and immigrants will be in the clear numerical majority which expands the American identity from just white, or rather, European Americans, to people who look a little more like me. As Langston Hughes said, I, Too, Am America. And with those demographic and national changes, the pool of people who are able to work, lead colleges, serve in political office, run companies, and govern our nation, looks much more black and brown than it does white.

These changes are threatening for white Americans. At least, that is what I assume based on the rhetoric coming out of the 2008 election of our nation’s first black president. “We need to take our country back.” “From whom,” I ask rhetorically, knowing that the answer is from black and brown people who also now hold power. The idea that a black man could sit in the highest seat of authority in the land is baffling to the white identity. This shows that there is also a shift in the social-political landscape amalgamated with our changing demographics that is sending folks into a tailspin.

As a result of this crisis of identity, the pushback against black Americans has been ridiculous. Police brutality and race-based terrorism are all symptoms of a people furiously looking for a means to maintain their identity, and unfortunately all of which get codified into an twisted, ideological belief system that supports the centrality of the white American identity. This is predictable, actually, it is not an aberration to the black experience in America at all.

What is a departure from the norm, at least, now it is coming to light, is what is going on in the white community itself. A recent Princeton study authored by economists Angus Eaton and Anne Case, highlights the dramatic increase in the suicide and drug overdose rates in middle-aged white Americans. This spike is particularly unique to this group as other racial and ethnic groups, including African Americans, have seen their mortality rates for all reasons go down. 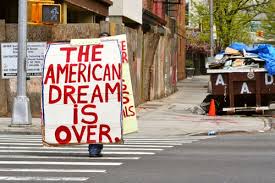 The reason for the rise in mortality rates? In addition to the challenging demographics, things such as the economic crisis, prompted by the 2008 collapse of Lehman Brothers and the housing market, in addition to the closure of working class manufacturing jobs has threatened the economic security of white Americans who have long thought that if they worked hard enough – and even believed in God – that they could achieve the American Dream. Now it is clear that this is simply not true. For all intents and purposes, white Americans are losing the narratives of their lives.

But you know, white Americans aren’t the only ones in history to experience this crisis of identity. In fact, the Jewish people, as shown in our biblical text today, did as well. Let me set the scene for you: You have a people who built their entire existence around the notion of being God’s chosen nation. Because this idea went to their head, they started going about the world acting like they have a right to oppress, exploit, and kill others, even people in their own nation. Sound familiar? God got angry about this and punished them by sending them into exile. He then has mercy on them and allowed them go back to their homeland and rebuild the temple which takes us to about 519 B.C. But the next several hundred years were nothing but a series of false starts due to their continual disobedience, outside oppression, and the increased Greek influence on Judaism.

In the face of the shifting culture and socio-political environment, the Jews began to construct a new narrative about themselves. At a base level, this identity formation is good because it is important that we know ourselves in the context of other selves. However, when you base your identity on a culture of superiority and oppression, this is where the problem lies. Unfortunately, this is exactly what the Jews did. They began to emphasize the centrality of their identity as God’s chosen people to the exclusion of anyone who did not fit their very narrow paradigm of acceptability, which demanded following endless strict moral and ceremonial codes. Something that only well-off men could do.

While this paradigm brought them comfort, Jesus called their pretense for what it was – a farce. Instead of validating their very shallow, shame-based identity, Jesus invited them into repentance which we see taking place in verses 1 – 17 of chapter 13. He challenged their understanding of righteousness and called them out on their hypocrisy because in their strict observance of the Sabbath day, they ignored the needs of others in their midst, including the hungry, the sick, and those who were political prisoners. The pursuit of justice got lost in the drive to secure salvation for ‘just us.’ Ironically, the very thing that they thought would bring them security was separating them from God.

The Jews were on the fast track to living outside of God’s Kingdom permanently. Ironically, the very thing that they thought would bring them security is driving them further away from God. But, wait, let’s look at those who are entering in. Verses 29, 30 say: “And they will come from east and west and from north and south, and will recline at the table in the kingdom of God. And behold, some are last who will be first, and some are first who will be last.” In other words, it’s the Gentiles, the sinners, the prostitutes, the oppressed, the socially marginalized, who will be welcomed into God’s Kingdom. The Apostle Paul affirms this in Romans 9.30-32b, saying,

It is at this moment, while Jesus was challenging the Jews on their identity in the context of the Kingdom of God, that the Pharisees came to warn him about Herod’s plan to kill Him. Now we know why. If the Jews really believed what Jesus said, it would change the way that they interacted with empire. Most likely, they would probably stop subsidizing it the way that they had. And most certainly, like Jesus, they would begin to speak out about the injustice inflicted by the hands of the empire. Perhaps, like Black Lives Matter activists today, they would begin to stage protests and other demonstrations to shame the empire into acting right.

But never mind that. Jesus does not concern himself with Herod at all. In fact, He completely de-centers him because he knows that Herod cannot kill him before it is his time to go. Instead, he turns his attention back to his original audience, crying:

“O Jerusalem, Jerusalem, the city that kills the prophets and stones those sent to her! How often I wanted to gather your children together, just as a hen gathers her brood under her wings, and you would not have it! Behold, your house is left to you desolate; and I say to you, you will not see Me until the time comes when you say, ‘BLESSED IS HE WHO COMES IN THE NAME OF THE LORD (Luke 13.34, 35)!”

Jesus’ heart broke for his people. He longed to rescue them, provide for them, in the same way that a hen cares for her children. Listen to his need to protect a people who simply cannot understand the impact of their choices because like children, they cannot see beyond their own primal need for survival.

But they refused. In spite of the sincere pleas to get it right, the Jews refused to let go of this false narrative that they have about themselves. In fact, they went to great lengths to maintain it, to the extent that they eventually handed Jesus over to the Roman Empire to be put to death.

Jesus, being the Son of God, knew this was coming. As he urged the people to get right, he also saw and understood that they simply wouldn’t. And so, exasperated, at least I imagine, he lets them have their way. Have it your way, if that is what you want. If you can’t let go of this one thing, this one thing that has shaped you but is destroying you at the same time, have it your way. But trust, judgment is coming.

Black people throughout our nation’s history have been the voice calling for white Americans and others whose basis of identity is the oppression of others, to change. Black history month, in many ways, offers whites the opportunity to surrender an identity based on 400 years of exploitation, rape, and theft, in exchange for an identity that recognizes and validates the humanity of black Americans. Essentially, it is an invitation for whites to stop hiding behind a culture of superiority, to face its history, and to commit to walking the path of anti-racism and justice in the future.

The process of redefining the white identity has to start with affirming the identity of black Americans and seeing black Americans as people who also bear the image and likeness of God. In that reframing, whites will begin to see blacks deserving of the same human rights and opportunities that are afforded to them. No longer is it a question of whether black children should have access to good schools and education, or whether they should be able to work livable wage jobs with health benefits, or if young black men are less deserving of the right to live and be free, or if black women have the right to speak out against their unique oppression. No. All of these questions become absolute when the white identity is reframed away from superiority and otherization. These questions and the need to define whiteness as something abhorrent to blackness dissipate because at last, you see our humanity. And in our shared humanity, we can walk forward together in peace to transform the world around us.

*This post has been amended from a sermon that I preached over the weekend at First Lutheran Church in Columbia Heights. You can listen to the sermon here. Please note that the sermon’s link also includes a brief children’s message before my own.*