This post is the third installment in a series that I have been hosting called, “Say Their Names” which tells the stories of amazing women in the Bible who like our male heroes, exercised and operated from a deep sense of faith. And from their stories, I will expound on other historical and modern day examples. Outside of the biblical text, I will only lift up the faith narratives of black women because in our sociopolitical landscape in this present moment, black women are often the most exploited and forgotten. This story will talk about the faith of midwives, Shiphrah and Puah from the book of Exodus.

Near the time of Moses birth, Pharaoh issued a command saying that all of the Hebrew boys should be killed. This insecure king was worried about the increased over-population of the Israelites and worried that if given the opportunity, the Israelites would revolt against them. So he decided to launch an all-out attack on Israel’s sons. He wanted them dead. He initially went through the Hebrew mid-wives and instructed them to kill the baby boys as they delivered them. But these women, including Shiphrah and Puah who were Nubian midwives (modern day Sudan), feared God more than they feared Pharaoh. Because of their faith in God, they refused to obey Pharaoh’s command – a move that could have cost them their lives. Upon learning that the Hebrew midwives were not killing the boys, Pharaoh went another route and ordered that all of Hebrew baby boys should be thrown into the river.

While many a mother undoubtedly lamented over the prospect of throwing her child into the Nile, they yielded to the sadistic whims of this insecure ruler lest they find themselves encountering harsher circumstances. They yielded to the law, even though the law was literally killing them and their children. But one mother decided to resist Pharaoh’s commands and chose to place her faith in God than an unhinged man. That woman was Jochabed.

Jochabed, the mother of Aaron, Miriam, and Moses, refused to throw away her child. Even though the consequences for rebellion were grave, she decided to not give into the pressure of a society ordered by policies and practices that oppressed, rather than liberated, her and her loved ones. Jochabed, full of faith and wisdom, hid Moses. And when she could no longer hide him safely, she designed a water-proof bassinet and placed him in it on the river – hoping that somehow, someway he would come out safely. Miriam, Moses’ sister, also exhibited great faith in this narrative. Though a child, Miriam followed Moses as the river carried him further away from home. Like Jochabed, Miriam was committed to ensuring that no evil came Moses’ way.

And we know that it didn’t. We know that once Pharaoh’s daughter found the bassinet, that she gave Moses back to his own mother to nurse and raise, and even paid her for it! But Jochabed and young Miriam had no way of knowing that their faith and acts of resistance would pay off so well. And neither did Shiphrah and Puah. These women simply  stood for what they believed in and refused to let someone else rule their lives and community.

Black women have been instrumental in birthing and protecting the young since time in memorial. It is a cultural tradition that proceeds the black experience in America – as Nubian midwives Shiphrah and Puah show us, the practice has deep roots in the African continent. Carrying this rich practice with them to America – among many others practices and traditions – black midwives were routinely called on to deliver both black and white women’s babies.

An article in NPR news describes how black midwives did this important work in the community:

“They brought bibles to read aloud and help mothers pass the time as they waited on pregnant women, massaging and bathing them and their children, cooking and cleaning for their families. Along with scissors, bags and smelling salts, we’re told that midwives also carried items to pamper mothers in their heavy medical bags: rose water, talcum powder, a comb. They used peppermint and chamomile teas to calm the nerves, ginger, mayapple and hot peppers to encourage labor and black hot(ph) herbs to ease the pain.”

The dismantling of this rich cultural practice has had other negative consequences in the black community, most notably related to infant and maternal mortality. More than any other racial and cultural group in the United States, black women and their children suffer from a disproportionate mortality rate in comparison to white women. A recent article in the Nation noted that while more than 23,000 babies die before they reach one year old in the United States and that the burden is carried by poorer, less educated families, in particular families reared by single black women.

“ Across the United States, black infants die at a rate that’s more than twice as high as that of white infants. The disparity is acute in a number of booming urban areas, from San Francisco—where black mothers are more than six times as likely to lose infants as white mothers—to Washington, DC. In the capital’s Ward 8, which is the poorest in the city and over 93 percent black, the infant-mortality rate is 10 times what it is in the affluent, predominantly white Ward 3.”

The alarming rate at which black infants are dying should be seen as a public health crisis! But the way this racism thing is set up, it is not. Fortunately, black women around our country, just as they have always done, resist the status quo by preserving our innate cultural and religious traditions around midwifery and teaching others to do the same. Women like Margaret Smith Charles, a midwife from Alabama, delivered over 3,500 babies in her almost 100 year life time, never losing a mother and losing very few babies. She and other black midwives prove that maternal and infant mortality does not have to be a reality. 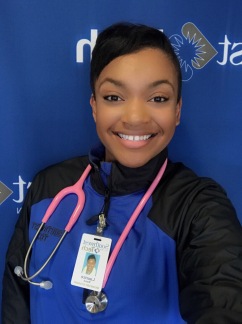 I am fortunate to work with one of these powerful black women, Laurice Reed. Laurice is an African American twenty-something working on becoming a midwife. Originally interested in political science and law, she discovered an interest in birthing when she attended her first hospital birth. “The mom was not treated as personal as she could have been,” says Laurice. “We could have avoided some of the interventions which slowed down the labor. There were too many doctors and nurses which made her more nervous than she should have been. In fact, the interventions are counter productive – they cause babies to go into distress and that is why the United States has such high c-section rate.”

As her interest in birthing grew, Laurice decided to attend an HCBU to study pre-med and then switched course to become a certified nurse midwife. “But it was still too restrictive. As I continued to do more research, I found that I could be a certified professional midwife so I could focus on home births. This was freeing for me because I did not want to do any hospital births. In May of 2016, I became a doula and birthing coach. When I had my first birth as a doula, I was more excited than the mom and cried.”

Laurice is now in a two year direct entry program to become a certified professional midwife. Nationwide, there are only seven (7) programs in the country to be a traditional, out of hospital midwife which includes water births and home births. While there are still practicing traditional midwives, most hospitals and insurance providers do not recognize them, showing that there is still a stigma associated with the work that black women once did and that which still exists has been co-opted by the dominant culture. “In the 1970s, the white community took over what black women had been doing for years,” affirms Laurice.

In spite of the ways that whiteness has co-opted black culture and tradition here, it cannot change the story of midwifery’s genesis. As Exodus shows us, that story begins in Africa, in our ancestral land – and that fact cannot be taken away! Black women like Laurice are reclaiming that story, and by doing so, showing us a pathway forward that draws from our fastrength, resilience, and beauty in order to create change. For Laurice, that change centers around the wellbeing of black mothers and infants, before, during, and after delivery. “We can have healthy babies in the United States if we put more trust in God and our bodies, than the system.”