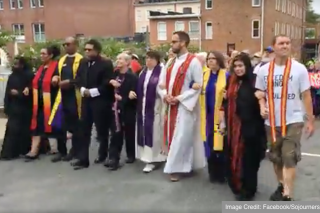 After the Charlottesville riot on Saturday, I wrestled with the idea of writing a piece  that would convincingly urge my Christian brothers and sisters to respond. I first contemplated the idea of speaking to the need for the Church to condemn the protest and violence of white nationalism, but it felt somewhat shallow. I then thought about issuing some sort of prophetic thesis, outlining the biblical mandate of justice and love for one’s neighbor. This too felt inadequate. Finally, I concluded that the church in America needed to have a bigger presence in not only speaking out against Charlottesville but all the other displays of white supremacy and nationalism, manifested through police violence, discrimination, lack of affordable housing, poor schools, and the school to prison pipeline. This approach, similar to the other ones, seemed to be gravely missing something.

Scrolling through Facebook, I noticed friends and acquaintances of mine hammering out these same messages. Watching CNN, I saw pundits from both sides of the political aisle putting their own spin on these same perspectives. I suspect that clergy all across America, mounted their pulpits Sunday morning rebuking not only Charlottesville but every vestige of white supremacy in America. And business leaders, if for no other reason but out of concern of their bottom line, have also put in their two cents about these racist events.

And that is when I realized that there is quite literally nothing more than I can say that has not already been said. I couldn’t devise a more clever Facebook post, or a more profound tweet, write a more convincing blog post, or preach a more compelling sermon simply because there has already been an abundance of information communicated through nearly every medium possible. And that is not just in regards to this particular incident. No, whether it was through BlackLivesMatter, the Black Power Movement, the Civil Rights Movement, the Abolitionist Movement, or in response to Charleston, Mass Incarceration, the War on Drugs, Jim Crow, or slavery, people have been speaking. Activists have been fighting, preachers have been raising holy hell, intellectuals critiquing, educators teaching, prophets prophesying, thought leaders proffering new ideas to get not only the church, but America’s people to pay attention to the disease of racism and white supremacy in our nation.

The problem, then, is not that the church in America lacks information. Or awareness. Or a prophetic utterance. Or any other acceptable sign. The problem is that the church lacks the capacity to actually give a damn concerning the suffering and marginalization of others. How else should we interpret the church in America’s overwhelming silence throughout the centuries on something so grave as this demonic stronghold that seeks to kill and destroy black people? We must not cheaply conclude that it is for ignorance that the church in America does not engage – it is an intentional decision made on the part by clergy and parishioners alike to bury one’s head in the sand and pretend as if the issues that affect black people do not exist.

In many ways, the church in America is like Pilate, wanting to wash its hands clean of any guilt while simultaneously handing God’s people over for slaughter. The church in America thinks it better to just ignore the problem of white supremacy, that is until the problem becomes completely unavoidable, such as in this moment. In this moment, I imagine that Christians who don’t have their heads buried in the sand are asking God for a sign. A fleece. A Rhema word. A gentle word spoken through the breeze. Tongues of fire. Something to really convince believers that fighting for racial justice and liberation for not only blacks, but other communities of color, is the heart of God. But the Gospel of Matthew shows us that God isn’t really into signs, at least, not for people who have already been inundated with so many clear instances of the truth. I am convinced that the 400 year silence between Old and New Testament scriptures was not as a result of God running out of things to say but as a result of God being frustrated saying the same thing over and over again to a very hard headed people.

The church in America is hard headed. And callous. It rather concern itself with doctrinal differences and having the right beliefs about God than be concerned about the actual living predicaments of people on earth. Here on earth, and in this country in particular, people are fighting for their lives. For the chance to breathe and actually live as full functional human beings instead of being shackled by racism and white supremacy. The counter protest in Charlottesville on Saturday was one visible sign of that. Unfortunately, I suspect, there will be others too. In this hour, i am not convinced that more signs and prophecies and marches and speeches will actually change the way that the church in America responds. And to be quite honest, this is because the church in America looks too much like the institutions that destroy blackness.

What will it take to finally move the church in America to action? We don’t need another charismatic preacher, a racial reconciliation conference, a dynamic book, a soul-inspiring lecture and most certainly do not need more empirical data or a 120 report explaining what we have all known to be true for 400 years. Lord, help us. We just need the will to act and obey. Until then, what more can really be said?

One thought on “What More Can I Say? On Charlottesville and White Supremacy”