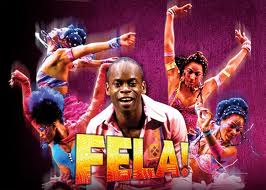 Yesterday my husband and I went to see a musical about the Afro-beat legend, Fela Anikulapo Kuti. And let me tell you, it was awesome. Between the amazing drum beats which took me back to the days when I studied dance with the Ko-thi Dance Company in Milwaukee and the wonderful jazz sounds coming out of the horn section, I was enthralled. And my husband was too, which is important since he has actually had an opportunity to see Fela perform while he was still alive. Based on this and growing up hearing his music, my husband had the bar set pretty high – but the performers brought it 110% and so he was pleased.

The music and dance were not the only thing we were paying attention to. We were keying in to the message, the words of the songs that were being sung to our very souls. Albeit some of them were profane, but they all hung on this single theme – justice for the oppressed. This theme of justice was woven throughout Fela’s music all throughout his life. Through the music, Fela spoke to the corrupt government and power structures not only in Nigeria but around the world. He challenged the status quo, went against the grain, and called these wicked forces into account for their actions. And although his actions came with a high price, never for a second did he back down from his commitment to turn the world upside down for the sake of justice.

One of the forces or entities that he challenged was the church, or let me say more broadly organized religion because he had his problems with Islam too. But in speaking, or for that matter, singing about the church he recognized that the same people who brought  Jesus to Nigeria also brought colonization. The same missionaries who preached salvation, also robbed the country of its wealth. And then when Nigeria finally received its independence from their grip, they still kept hold of the country’s strings and paid corrupt leaders to continue with the whole charade that they were seeking freedom from.

I don’t blame Fela for his resentment. In the name of Christ, people did some really horrendous things not only in Nigeria but the whole world over. They have colonized, enslaved, raped, pillaged, stolen, oppressed, and killed so many lives under the disguise of Jesus. But if you look at Jesus, which will require you to seriously read your Bible, He does not look like any of these things. Honestly, Jesus looks a whole lot like Fela, the cussing and illicit sex aside. Like Fela, Jesus challenged the powers of His day. Though He did not sing, well maybe He did, He spoke to the evil regimes, the government, even the religious leaders of His day, calling instead for the freedom of prisoners, sight for the blind, and freedom for the oppressed!

So where does that leave you and me? Seriously, we have a choice to make and it is about time that we do it! For far too long, we, and by we I mean the people of God, have been comfortable with the association of God’s name with absolute wickedness. And we have even been involved perpetrating it! We supposedly care so much about abortion and homosexuality, as if these were the unpardonable sins, yet we are completely ignoring what God has to say about oppression and injustice. Do we not take the words of Jesus in Matthew 25.31-46 seriously or do we just not care?

Or maybe we just don’t know. Maybe we have forgotten. Maybe we have become too comfortable, have gotten caught up, sidetracked, blind-sighted or whatever else. Regardless of where we find ourselves in all of this, God is calling us to turn our ears and our hearts to the cries of the suffering all around us. God wants us to respond to homelessness, hunger, poverty, racism, genocide and every other evil, not just with words but with deeds.

Although there is much more that I can say on this topic, I will end with this thought found in the New Testament book of James:

Anyone who sets himself up as “religious” by talking a good game is self-deceived. This kind of religion is hot air and only hot air. Real religion, the kind that passes muster before God the Father, is this: Reach out to the homeless and loveless in their plight, and guard against corruption from the godless world (James 1.26, 27 The Message).

Many of us consider ourselves religious, spiritual, God-fearing believers. But according to James if our talk is not backed up with actions that relieve the plight of the oppressed, we are only blowing hot air. Let’s not just blow air or talk a weak game that has no power!  Instead, let’s take our part in advancing justice in our community, city, country and world for the sake of Jesus Christ.

3 thoughts on “Message in the Music: What I Learned from Fela”