“Show a people as one thing and only one thing, over and over again, and that is what they become.” – Chimamanda Ngozi Adichie, Danger of a Single Story.

Dangerous. Crime ridden. Littered with trash and broken glass. Infested with miscreants and human vermin. Falling apart. According to a recent commentary in the Star Tribune, these are the characteristics that define North Minneapolis.

Unfortunately, the language and the sentiment expressed in the article are not new. North Minneapolis has a history of being associated with drugs, violence, and chronic poverty. A quick google search of the community accompanies words such as, ‘shooting,’ ‘crime,’ and ‘safety.’ Yet, these words are often racially coded euphemisms for describing black people so that the user of the word does not appear racist. And in North Minneapolis, where black people comprise of 43% of the community’s residents, those who are sympathetic to the same views that the article purports use these terms to talk about black people without naming them.

When many look at vibrant communities with a large population of black people, this is all they see. Such is the reason why black people in North Minneapolis and across our nation, regardless of income, education, or a host of other factors, are stopped and profiled by law enforcement. And it explains why, black people are assumed to be guilty of wrongdoing whether we are walking across the street, attending a child’s birthday party, or helping out a friend in distress – no matter which neighborhood we live in. It also points to the reason why black people living in a community with a high concentration of poverty are identified as the problem instead of the history of structural racism and policymaking that caused that poverty. Black people are left on the hook to not only solve a problem that the system of white supremacy created but that this same system continues to benefit from.

The Danger of a Single Story

But this single story of North Minneapolis – and the people who live in it – isn’t completely true. And most single stories about people, places, or things never are – they are usually limited in scope and reflect a narrative that is most convenient for those in power to tell. Think about places like Chicago, Los Angeles, New Orleans, Queens, NY, or where I am from, Milwaukee, WI – all of these places are heavily populated with black people who are only recognized for their poverty and crime. Growing up in one of the roughest parts of Milwaukee in the 1990s, I heard the same terms applied to North Minneapolis used to define my own community: ‘at risk,’ ‘thugs,’ ‘drug dealers,’ ‘murderers.’ Our neighborhood was so badly stigmatized that after church, my youth pastor would reluctantly drop me off at home and pull off before I even reached the front steps. Family members were concerned for their safety whenever they came over to eat dinner. When we first moved in, my step-grandfather bought us bars for our front door and insisted we get a dog. But the reality is that my neighborhood consisted of much more than its negative, pervasive stereotypes.

So does North Minneapolis. 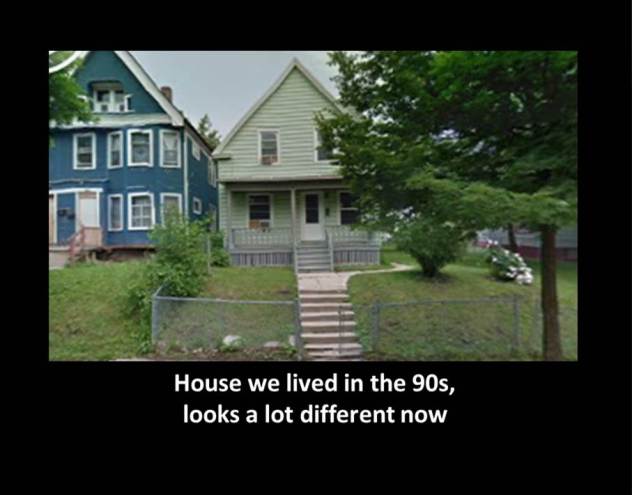 This is what Chimamanda Ngozi Adichie shows us in her TED Talk, Danger of a Single Story. In the talk, Adichie tells the story of Fide, her family’s hired help when she was a child. Upon hiring Fide, Adichie learned that his family was extremely poor. Her parents would send old clothes, food, and other goods to support Fide’s family. And as a means to control her own behavior, Adichie’s family would even  juxtapose her reality against Fide’s – “Don’t you know? People like Fidel’s family have nothing.”

Poverty was the only idea that Adichie ever entertained in relation to Fide and his family. Because they were poor, she never stopped to consider other facets of Fidel’s identity. Was he industrious? Was he interested in math or science? Was he good at soccer? Did he like to draw or build things? Was he a good cook? Did he have a sense of humor? These questions never crossed Adichie’s mind because all she had grown to recognize in someone like Fide was his level of poverty.

It was not until Adichie visited Fide’s village that she began to construct a new narrative about him and his family. Seeing artwork crafted by his mother forced her to abandon the monolithic framework in which she pigeonholed Fide and all who might represent him. At last, she was able to consider that while Fide was poor, he was also much more than that, which likewise opened up the possibility for her to connect with Fide as human equals instead of relating with him from a place of hegemony.

If people would allow their deeply held sentiments about black people to be stretched, like Adichie, they would begin to see us as equals and people deserving of the same access to rights and opportunities that are afforded to them. Such a framework would subsequently give them the ability to affirm the humanity of others and would likewise prevent them from exploiting it for personal or political gain. All of a sudden society would stop defining black residents in places like Chicago, Milwaukee, and North Minneapolis by crime and see us for all of the beauty, power, wisdom, and ingenuity that we carry.

Unfortunately, this framework is missing from the article in the Star Tribune. Instead, it validates another dehumanizing narrative that has dangerous consequences including further disinvestment. In the words of Dr. Bruce Corrie, professor of Concordia, “If I can devalue you and minimize your self worth, I can exploit you.” When the narrative that this article projects is maintained, developers are able to justify investments that push blacks and other residents of color outside of their neighborhoods; decisionmakers have a platform in which to intensify the presence of police officers in already heavily policed communities; and nonprofit agencies positioned to ‘help’ continuously examine these places through a lens of pity instead of seeing the innate power and beauty that is compellingly present.

Crafting a New Narrative
We need a new narrative that breaks beyond the despotic viewpoint of places like North Minneapolis and instead offers the complexly wonderful stories about these communities.

Of a truth, poverty and crime are realities in North Minneapolis. Yes, there are safety concerns. And yes, there is a level of despair because of decades of structural racism that has stripped the community of essential economic opportunities that are needed to survive. Systematic oppression and exploitation over four centuries has surely taken its toll on the black body in detrimental ways.

All of this is true.

And yet, North Minneapolis is also much more than that. Every time that I step into the community, this is what I see:

North Minneapolis is overflowing with a deep sense of cultural pride and a spirit of resiliency. Resiliency that dates back to the 1930s, when black people first started to settle there and began to build a community that withstood highway construction, redlining, environmental pollutants, and every other malady thrown their way under Minnesota’s version of Jim Crow policy.

There are bricks and mortar institutions, created by the community, for the community, under the leadership of the community including business and nonprofit organizations. Religious and cultural institutions. Workforce training and education centers. Restaurants, barber shops, playgrounds, and recreational spaces.

And the people. The people themselves are as rich and varied as in any other community – lawyers, students, artists, preachers, poets, politicians, janitors, doctors, activists, entrepreneurs, executive directors, sales associates, imams, architects, bikers, construction workers, healthcare professionals, consultants, videographers, and so much more. And these are black people!

And there is so much love and connectivity. A trip to Avenue Eatery on Broadway guarantees that one will see at least five people either known personally or through professional circles. Every event feels like a family reunion of sorts – a place where everybody knows somebody. The sense of solidarity runs miles deep, something that was evident in the Jamar Clark protests this past fall.

This is just a small sliver of the allure that characterizes North Minneapolis. And these exist because the people, the same people which the article dehumanizes, made it happen. People are creating and recreating all that is good and wholesome about this community every single day. In fact, if people who held such demoralizing ideas toward North Minneapolis and other urban areas nationwide could see that, much of the crime and poverty concerns would be minimized.

It is time for society to open their eyes to the beauty that lies in places like North Minneapolis. Step beyond the framework that only validates the experience, expertise, and humanity of white people, and affirm the experience, expertise, and humanity of black people as well as other communities of color in this rich community. And lest we forget: North Minneapolis gave Prince to the world. That alone has to count for something!